Boerboel is a dog breed of bulldog type molasses originating in South Africa; it comes mainly from the cross between Bullmastiff, Great Dane and Bullenbeisser, the latter already extinct.

Boerboel.
It is a breed very suitable for guard, self-defense and heavy work. The first specimens date from the year 1600. The breed is fully standardized in Africa by associations such as HBSA, SABT and EBBASSA.

History
This breed comes from South Africa, originally a Dutch colony before the Boer Wars, at which time it became a colony of the British Empire, where it emerged for the purpose of protecting the farm. The word "boer" in Dutch means "farmer" so "boerboel" means "farmer's dog". It is not known for sure which breeds originated but it is believed to come from dogs led by the Germans, French and English.

General characteristics
It is a strong, muscular, large and very well proportioned dog. Its head is short, square, muscular and with well-filled cheeks. The muzzle is black with large nostrils. The neck is strong and muscular. It has medium V-shaped ears. Its hair is short and smooth in texture. The eyes can be of different shades of yellow and brown. Blue and gray eyes are considered more exclusive. The tail is usually amputated.

The uses of the Boerboel
Despite its imposing appearance, the boerboel dog has a calm and very protective character with the people he meets. His pride and bravery make him an excellent guard and defense dog, he is loyal to the family and is very patient with children, but its use as a companion dog is not recommended.

Constantly seeking owner approval, he is a tough and very active dog that can dose his strength as needed. Unfortunately, it is often used in fighting and as a chain dog, uses that obviously accentuate its aggressiveness, to the point that it has been declared illegal in Denmark.

Fur
He has a short, thick coat with a soft texture.

Temperament
It is a trustworthy and obedient breed, with a highly developed watchdog instinct. It is an affectionate and playful dog with its owner, tends to be protective of the family, but can be very aggressive towards strangers. He is very self-confident and fearless.

Care
His hair should be brushed occasionally and he should bathe when necessary (once a month). The Boerboel needs to exercise, it is recommended to take it out for a long walk daily. It is a dog that should not go out alone because it is not very friendly with strangers. It is not for apartment living, it must have ample space to run and play. It should not be left alone for long periods of time as it can become destructive. It is a breed prone to hip dysplasia, eye, thyroid and heart problems.

At first glance, you might think that the large and intimidating African Boerboel, also called the South African Mastiff, is an excellent guard dog, fierce and fearsome. But although that is true, this dog is also very family-oriented, calm and loving, especially with children.

It is a docile and sometimes somewhat stubborn dog, although it is territorial with a good education and care, we can diminish that behavior so common in dogs.

From SoyUnPerro we will show you all the information about this breed, what precise feeding, necessary care and behavior. So you can enjoy it, as much as yours.

Character and behavior of the African Boerboel breed
The Boerboel is naturally playful, intelligent, and always eager to please. As is often the case with field dogs, he is happiest when he has a job to do and has a place to run.

He adapts perfectly to family life, especially with children, with whom he is especially protective, sometimes even excessively. His affectionate, playful and even somewhat clown character sometimes make him unique and very funny.

The same instincts that make the Boerbel an excellent watchdog can also make it aggressive if we don't educate and socialize it properly. So investing time in your education is essential.

Boerboel physical characteristics
Both its physical complexion and its size make the Boerboel an imposing dog. Its height at the withers is between 65 and 75 cm in males and between 60 and 65 cm in females. The weight that adults reach can reach 90 kg and even more. It is, in short, a very large and powerful dog, but incredibly agile.

His body is muscular and well proportioned. Its head is also large and wide, with a black snout and large nostrils in the nose. It has "V" shaped ears and the color of its eyes varies between different shades of brown and yellow (some specimens may have blue eyes).

The Boerbel's hair is very short and soft to the touch. The most common coat colors are yellow, dark red, brown and brindle. He often has a black mask, that is, black hair around his eyes and mouth.

Boerboel Dog Education and Training
When it comes to training, the Boerboel tends to be dominant, so it will be up to us to be confident and very strict. In short, establish limits and set the guidelines, although always using the effective resource of positive reinforcement and not being excessively severe.

A progressive, patient and constant training technique will be easier if it is accompanied by an early socialization process, essential to prevent the aggressive impulses of the Boerboel.

This dog requires a lot of mental and physical stimulation, otherwise it can fall into boredom or anxiety, which is the prelude to destructive behaviors. Long walks, vigorous play sessions and the occasional intellectual challenge will help us provide you with the activity you need.

Also, being a high-volume dog with moderate exercise demands, the Boerboel needs a lot of space at home, so it is not the ideal dog to have in an apartment or flat. It is best to have a patio or garden where you can run safely.

Recommended care
The Boerboel is considered a very healthy breed of dog that does not require too much care. However, he is predisposed to suffer certain ailments and physical problems, especially in his last years of life, such as hip or elbow dysplasia, some heart conditions and disorders that affect the eyelids, to name the most common.

Beyond that, regular care of the Boerbel is fairly simple. You have to cut your nails every two weeks and you should brush your teeth regularly, although always following the instructions of our vet. A brushing a week and a bath once a month will be enough to keep your coat healthy.

Breed history
This breed was bred and trained to help South African farmers defend their homes from attack by hyenas, lions, and other wild animals. In fact, its name comes from Afrikaans, the dialect of Dutch spoken by South African boers, and its translation is something like "the farmer's dog".

Dutch settlers brought many dogs of different breeds to the south of the African continent, mainly bulldogs and mastiffs, which they bred and bred until they found the type of dog they needed to work on their farms and keep their land: the Boerboel.

In the 20th century, with a less rural and more urbanized country, this dog was losing its place in South African society and was on the verge of extinction. Luckily, a group of Boerboel enthusiasts launched in the 1980s to recover the breed and start exporting it to the rest of the world. Still, today the Boerboel is still quite difficult to find outside of South Africa. 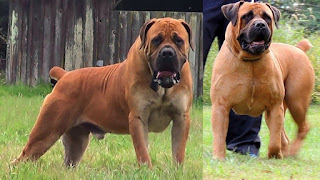 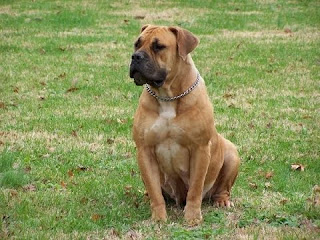 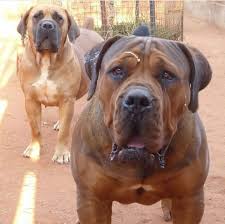 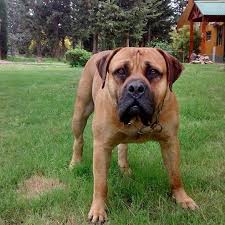 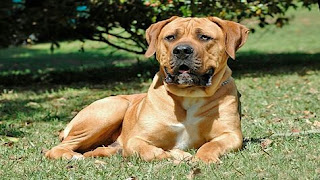 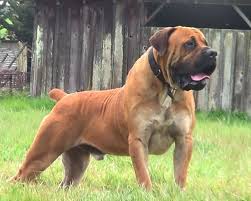 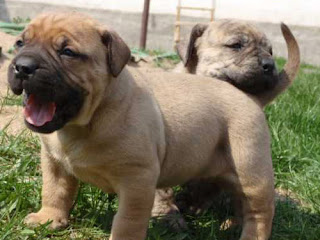