July 16, 2020
Maltese Bichon
The Maltese Bichon is a small or medium-sized breed of dog that emerged in the central Mediterranean, with Italy taking over the patronage. The breed name and origin are generally associated with the Mediterranean island of Malta, however the name is sometimes described with reference to the island of Mljet or Meleda (Latin: Melita).

History
The origin of the breed is unclear. Phoenician merchants brought the ancestors of this breed from Egypt probably more than 2000 years ago, being spread in the Mediterranean. In the tomb of Pharaoh Ramses II (1301-1225 BC) stone statuettes have been found that resembled today's Maltese. There are images in glasses of the period between 500 a. C. They are very similar to Maltese, next to the image of the dog the word Melitae is read. From the current perspective, the relationship is not evident since that could have been later. L. Beckmann has also traced ancestors to those of the Dwarf Spitz.

Again, the name by which the International Cynological Federation (FCI) describes it in the standard indicates that it does not come from the Island of Malta. Since the word is a Semitic derivation of the word "màlat", which means "refuge" or "port" and is the root of many place names. The FCI describes the origin of the word as follows:

Its name does not mean that it originates from the island of Malta, because the adjective "Maltese" comes from the Semitic word "màlat" which means refuge or port; This Semitic root is found in a variety of maritime place names, such as the Adriatic island name Meleda in the Sicilian city of Melita, and also on the island of Malta. The ancestors of this little dog lived in the ports and coastal cities of Central Asia, where they hunted the mice and rats found in port warehouses and in the holds of ships where they spread widely. In the list of dogs existing in the time of Aristotle (384-322 B.C.) a breed of small dogs is mentioned, to which the Latin name «Melitense dogs» is attributed. That dog was known in ancient Rome and was a favorite companion to matrons, he was praised by Strabo, a first-century Latin poet.

After Callimachus, Pliny the Elder, Stephen of Byzantium, and Constantine VII, the breed was named after the island Mljet (in ancient times Melita or Melitaea). Aristotle was the first to mention his name Melitaei Catelli, when the dog is compared to a mustelid, around 370 a.

Around the 17th and 18th centuries, some breeders decided to "improve" the breed, making it even smaller. These dogs were the size of a squirrel, Linnaeus wrote in 1792. The breed almost disappeared and was bred with other small dogs such as poodles and miniature Spaniels. In the 19th century, there were as many as nine different Maltese dog breeds.

Malteses of solid color and parti colors were accepted in England from 1902 to 1913, and at a later date, such as 1950, in Victoria, Australia, however later it was instituted that the Maltese had to be white.

The Maltese was recognized as an official breed by the FCI under the patronage of Italy in 1954, at the annual meeting in Interlaken, Switzerland. The current standard was approved on November 27, 1989, and the last translation from Italian to English is April 6, 1998. The American Kennel Club recognized the breed in 1888 and its latest standard is March 10, 1964.

Temperament and function
The Maltese is recommended as a companion animal, as they are adequately socialized and educated, but they are usually lively, intelligent, affectionate and friendly, with the eternal appearance of small cubs. It is a protective dog of the house, which allows it to be used as an alarm dog, —like the Chihuahua or the Yorkshire Terrier. These little dogs adapt to homes where there are older children and teenagers. They do not present problems with children, as long as the dog is respected and educated. It is advisable to give him something to entertain himself with, such as a rubber bone or toys in general. Of which they are very fond.

Being small they do not require much exercise so a daily walk will be enough to cover their needs, this makes them good candidates for older people. Taking them for a walk would also serve to make them sociable — an important aspect of dog education. It must be trained to be obedient and, like most dogs, will respond better to stable and consistent positive reinforcement training. This breed of dog can help with canine therapy and could also help foster a sense of responsibility and order in children if they are put in charge of their basic care — like brushing, taking them for walks, and caring for fresh water. It is preferable that the feeding is carried out by an adult. With proper socialization, they will avoid being nervous dogs or being restless with other dogs or pets.

They can be trained to do tricks or stand on their hind legs for several minutes. Their playful nature will make them respond well to this type of training. Although perfectly suited to apartment living due to their small size and domestic character, they love to stroll outdoors. Being a delicate breed, especially when they are puppies, they require extra care.

It is advisable to feed them with a good quality feed or with BARF, and although, like all dogs, they like human food very much, but it is not recommended to give it to them, since dogs lack some enzymes necessary to catalyze certain substances present in processed foods, such as chocolate. Sometimes they can suffer from allergies. In adult specimens, food portions must be kept under surveillance to avoid being overweight.

Special cares
Daily care includes brushing the cloak with a suitable comb. Daily grooming should also include cleaning the eyes, tear ducts, and around the muzzle — all to prevent your white hair from turning brownish brown in those areas. The risk of dark spots around the eyes can be a problem in this breed, and it occurs mainly depending on the amount of water that the dog's eyes produce individually, along with the size of the tear ducts.

The Maltese Bichon is a long-haired dog, and requires a series of special care to keep its coat in a healthy state and thus avoid skin problems and hair knots. Many owners find that a weekly bath is enough to keep the coat clean, but it is best not to wash a dog as often (once every month and a half should be enough). They need to visit the dog groomer about once every month and a half. Regular brushing is also necessary to prevent hair from tangling. Many owners will keep their Maltese with the "puppy" cut as it keeps the coat short and makes the dog look like a puppy. Some owners, especially those who participate in dog shows, will keep the Maltese with long hair. Some dogs need to be dried with the electric dryer in order to avoid knots. Maltese also have their hair packaged so that it does not break (packaging consists of oiling the fur and then packing small strips of paper or plastic, securing them with an elastic band).

As the Maltese have only one layer of fur, they fight little or almost nothing if they are properly cared for. Like their relatives, the Poodle and the Bichon Frize, they are largely considered a hypoallergenic breed, but this could be somewhat misleading, as the necessary maintenance required to keep the Maltese's white mantle healthy helps to eliminate the free hair. Frequent trimming, brushing and bathing necessary to keep Maltese hair in good condition not only removes or removes dead hair and dandruff, but also controls another powerful allergen: canine saliva.

Physical characteristics
They weigh between 3 and 4 kilograms. They have a compact body and the height for the male is 21–25 cm, and for the female it is 20–23 cm. The American line, under which the so-called Maltese Toy are found, are smaller, weighing between 1.2 and 2.8 kilograms.
They have a long silky coat of pure white or ivory, in which some minor and very light yellow or light brown spots are allowed. It is very fine, soft and silky, of a considerable length (almost reaching the ground), without curlers but tending to knot, it hangs on the sides from a line that goes from the nose to the tail. They have no inner mantle.

They have a medium-sized head with a small forehead, a round skull. The nose is black. and her large, oval, dark brown eyes with attentive and very dark black eyelids. Its snout is moderately long, fine, tapers until it reaches the nose. The ears are long, droopy and hairy, with a low implant, hanging very close to the head, as if leaning, in the part of the muzzle it remains brown when it is older.

They have short, straight legs. Its tail is elegant and covered with abundant hair, and it appears curved on its back. 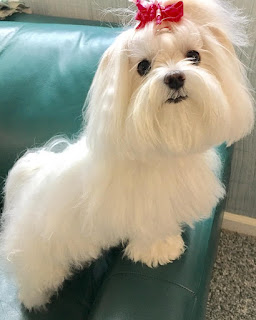 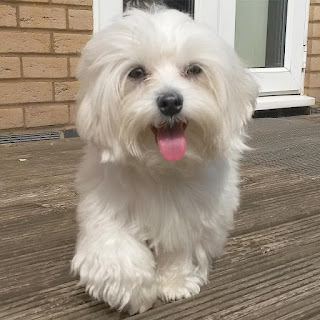 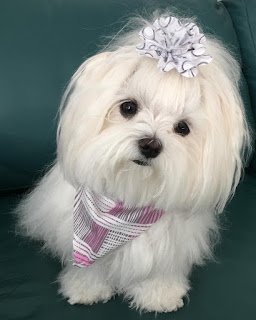 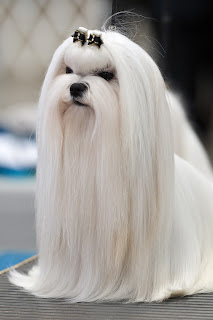 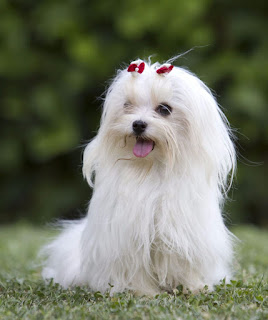 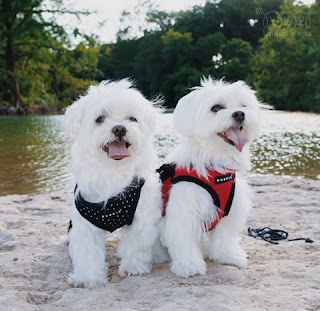 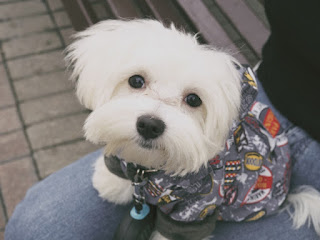 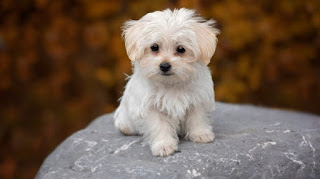 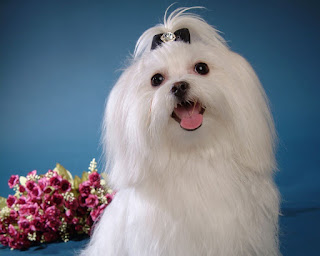 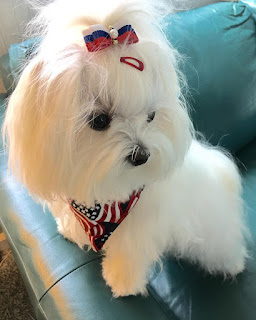