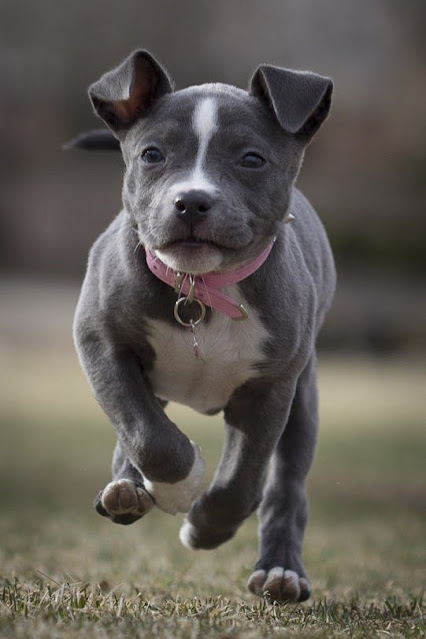 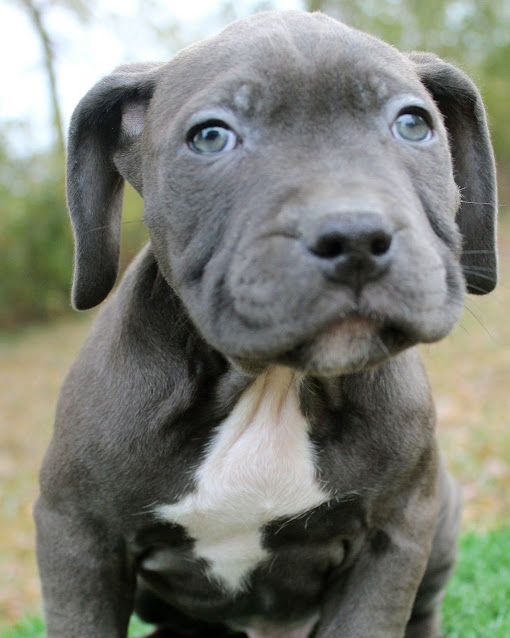 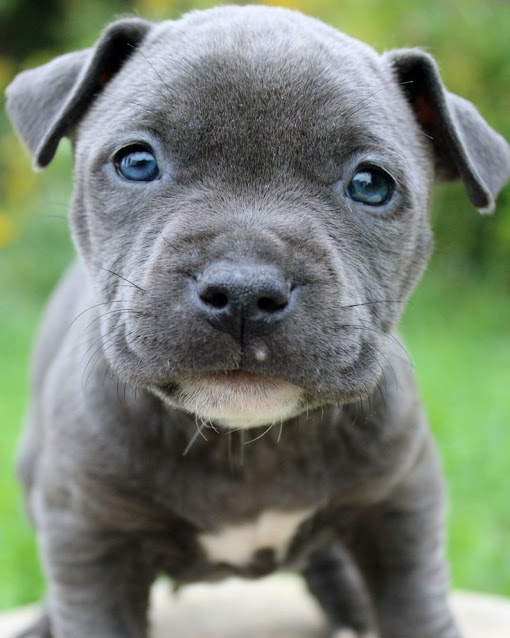 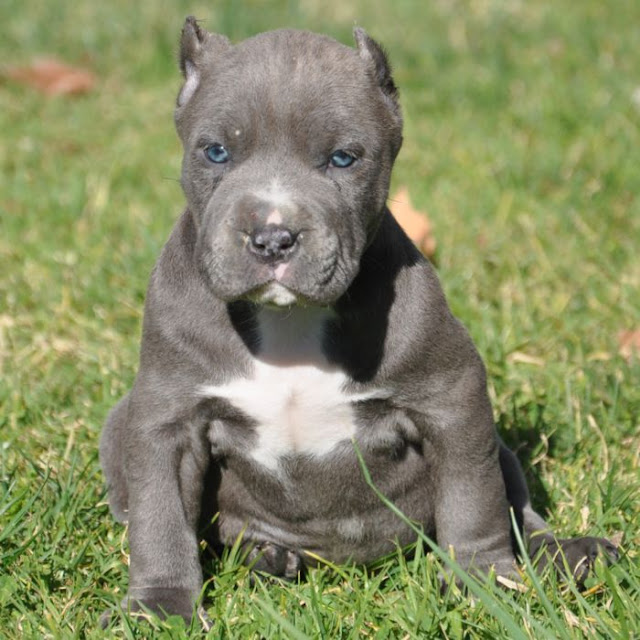 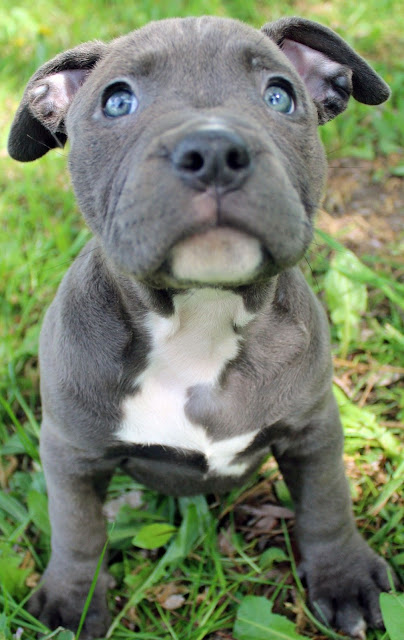 Impossible not to fall in love with the tender blue gaze of a blue-eyed pitbull puppy. I'm really telling you, the look these dogs have is impressive. They convey a lot of love. Nobody can think that there is even a minimum of evil behind those eyes. These animals are very good!

We have searched for you photos of pitbull puppies with blue eyes that will leave you speechless. You are going to want to have them all because they are precious! Having a pit bull is a really wonderful thing.

Among the different breeds that we can find with Pitbull genetics, the Pitbull Blue stands out for its peculiar beauty and physical characteristics.

With blue or honey-colored eyes and gray hair, he will not leave anyone indifferent. That is why we want to tell you all the details about this impressive breed, from its origins to the care it needs to live healthy and happy or the precautions we must take.

What is the origin of the Pitbull Blue?

The Blue is a type of American Pitbull Terrier (known under the acronym APBT) characterized mainly by its gray-blue color. In general, it is a breed occasionally confused with the American Staffordshire Terrier, with which it shares origins.

These date back to the 19th century in the United Kingdom, where they began to experiment in the crossing between Terriers and Bulldogs - taking into account that the Bulldog at that time had little to do with the current English Bulldog, possessing a physiognomy very similar to Pitbulls that we know in these times, although they were much bigger and fierce.

In this way, they were looking for a breed that combined the bravery of the Terrier, thus achieving greater agility without losing combativeness, and the strength of the Bulldogs intended for bull and dog fighting. They were chasing a fairly strong dog with hunting skills, but they only got one good fighter.

The origin of the name comes from the fights, called "bull-baitings" for the fights against the bulls. After the prohibition in 1835 in England of these fights, they put them in a pit to fight against rats. The one that killed the most rats in the shortest time was the winner. The word "pit" in English is translated as "pit", hence the unification to form the word "Pit Bull".

In the case of the Pitbull Blue, it was forged from the aforementioned cross and imported from the United Kingdom to later be crossed with the breed - now extinct - of Blue Paul Terrier, discovered by the pirate Paul Jones and where its pigmentation comes from. grayish.

The pitbull was recognized by the American Kennel Club (AKC), and was later removed from their records due to the bad press that a fighting breed brought with it.

This imposing dog has many qualities and characteristics that make him special. It is desired for its blue and gray pigmentation. This is one of the most curious qualities and that's where its name comes from. This same can occur both in the coat, in its eyes or in its nose (truffle).

This pigmentation is due to the fact that an "allele" is contained in their genes that causes the natural pigmentation of canines to mix with the bluish pigment, giving it this strange characteristic that Pitbull Blue possesses. Without a doubt, this characteristic makes it more than desirable, since its genetics is what makes it unique.

Its fur is grayish-blue in color, and its legs, tail, neck, forehead and chest are white.

The characteristic mantle is qualified by the name of Blue Fawn. It has to be short and strong. Of course, the luster of the coat usually reflects the health of the dog, a sign of vital importance.

The skin should be thick and loose, but not pleated, except for the neck and chest, which should be loose enough to show some vertical folds.

Another feature by which we recognize him, after his incredible hair color, is weight. This ranges from 14 to 28 kilos, although up to 40 kilograms have been seen, but it is not usually healthy.

The Pitbull Blue is a medium-sized dog with a solid and compact appearance. In fact, in females it may be slightly longer than in males.

Pit Bull Blue provided on the head should appear two-thirds the width of the shoulders and be wider at the cheeks than at the neck at the base of the skull.

The muzzle has to be straight and square in shape, wide and somewhat flat, not as long as a bulldog, it can be more or less long, but without reaching the length of breeds like some shepherd dogs. The depth from the top of the head to the bottom of the jaw is very important.

The head will have a wedge shape when viewed from above or from the side, and when viewed from the front it is round. Their eyes can have different shades of blue, although this is rare, which is why most Pitbull Blues have honey-colored eyes. Being gray, the nose should be the same color up to the lower lip.

The ears are small to medium in size, tall or half-dropped. This is the natural way, although unfortunately many are still found with cropped ears, the neck must be strongly muscled to the base of the skull.

As for the trunk, the chest is deep and full. The width must not exceed the depth. The loin is short, muscular and arched. It has strong and well-defined musculature as it is a very athletic dog.

The tail is relatively short, with a broad base, gradually tapering to the tip.

Despite its unfair fame, the reality is that we are dealing with an intelligent, vital and playful dog that enjoys the company of people. However, we cannot forget that it must be socialized from a puppy, since we are talking about a breed, whose bite, apart from urban myths, can cause very serious damage.

In general, the APBT is a friendly and balanced dog that, contrary to popular belief, does not stand out for being aggressive.

The character of the Pitbull Blue is characterized by emotional stability, tolerance with children, affection with the family, not sociability with strangers that he considers dangerous, the aptitude for guard and dominance with other dogs.

It is a confident, cheerful, funny and very enthusiastic dog. Enjoy the company of both other dogs and humans to the fullest as they are very familiar and friendly, even if they are strangers (as long as they do not present any danger).

The aggressive character that in recent years has been related to this breed is not due to a characteristic element of it. Clearly, cases of aggression are about dogs that have been poorly socialized or that have been abused, something that can happen in any dog, whether of breed or not.

Pitbull Blues have a very charismatic and really friendly character. They are obedient and calm. Although their appearance may not be apparent, they are the best pets an owner could wish for.

Mainly, these canines are faithful, intelligent and kind to all kinds of people. For this reason, do not judge them by how they look, as they are quite robust and this can misinterpret their character.

Living with a Pitbull Blue

They have been shown to be excellent guard and companion dogs. The aggressiveness of the Pitbull develops only if the owner wants it, or, rather, if the training is based on the attack.

Of course, living with a Pit Bull is not discouraged, just be aware of responsible breeding and be informed. The specialists say in turn, that we should not be afraid of the Pit Bull, but of the people who are dedicated to the indiscriminate reproduction of this breed.

Otherwise, it is a breed of obedient behavior, with little tendency to destroy objects or furniture.

To educate these Pitbulls it is necessary to give them imposing orders, but violence should not be used at any time. The latter can be the trigger that your Pitbull Blue is aggressive or does not know how to behave, you must use firm and clear orders to be able to successfully educate your pet.

Puppies absorb all stimuli, even aggressive behaviors. Therefore, if a dog is bred aggressively it will be aggressive. Always be aware that the character of a Pitbull Blue will be defined by its own owner.

Many times a canine of this breed has been accused because it is very aggressive or uncontrollable, but the reality is that if you do not give it the necessary care and treat it with respect, they will not be able to have the best of attitudes.

It is important to consult with a trainer or study the training manuals carefully so that you do not make any mistakes.

How is the Health of a Pitbull Blue?

These Pitbull Blues are quite resistant and do not present diseases like other types of breeds.

The Blue Pit Bull is generally a healthy breed. It does not usually present specific diseases, and the specimens themselves are usually very healthy and resistant.

Of course, it can be afflicted by any of the diseases typical of the canine breed, making special emphasis on hip dysplasia. As for the slightest symptom of dysplasia, we must go to the vet for a review.

You also have to be on the lookout for possible heart-related problems due to the amount of exercise they are used to doing.

As for skin problems, this breed is prone to pyoderma or demodeccia. Some specimens can become allergic to fleas or certain foods, generating a dermatitis that makes them scratch continuously.